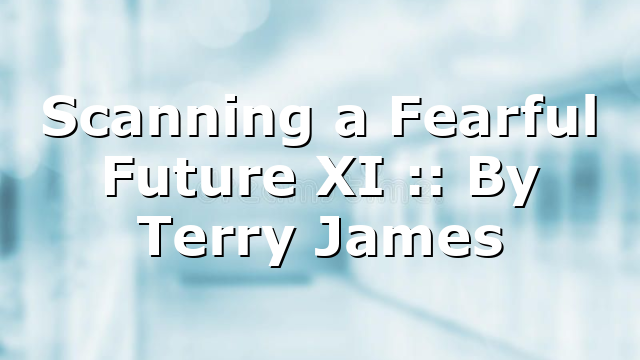 “Scanning a Fearful Future Part 10” (the conclusion of the series) was completed early in 2011. We’ve revisited that series of articles on two additional occasions, I believe. I am convicted that here, in September 2022, it’s time again to look ahead—”scan”—into the ever-deepening march of humanity toward the consummation of this Genesis 6-like age.

Many prophecy watchers won’t agree with my take on the matters I present in this addendum because it’s not scripturally provable. But I don’t claim it is; admittedly, the thoughts I put forward are conjecture rather than necessarily Holy Spirit-prompted.

I do believe, however, that my thinking is legitimately evidence-based, considering my long-time Bible-centered observation and dissection of these wicked times.

My only reluctance in dealing with these matters stems from the frequently expressed realization that my thinking—like that of many of my colleagues—is too often—Amero-centric. That is, we too often consider our nation to be at the center of everything when we look at prophetic progression.

With all that as a preface, I nonetheless must once again say I see America as perhaps key to the wrap-up of the Church Age (Age of Grace).

Is America in Bible prophecy? That, of course, is among the questions often asked. Always, my answer is: No—not by name.

Is America the Babylon prophesied in Revelation chapter 18? My answer to that has evolved over much study to be “perhaps.” But, again, it can’t be proved to be that condemned city/system of evil that has afflicted all the world with sin. However, America is, almost undoubtedly, a part of that commercial and cultural system.

My belief that America fits within the final system of wickedness is confirmed with each news report. As stated on several occasions, considering the use and abuse of the most vulnerable among humanity is evidence of how far from the heart of God mankind has “progressed.”

The fact that such upside-down thinking and conduct are said to be “progressive” proves how culture in America has the “reprobate mind” of Romans 1:28. Those who claim to be “progressive” are, in fact, moving in the direction opposite of Heaven’s command to the human race. This mindset is inflicting on the very young the evil that can be churned only through minds attuned to the god of this world.

As stated before, history attests that every major civilization on record has come to its inglorious end while engaging in child sacrifice and unspeakable abuses by the adult generations during those times of collapse and demise.

Time and time again, we’ve looked at abortion in America today and have concluded that murder in the mothers’ wombs is, in the majority of cases, used as contraception to cover for sexual misconduct and/or irresponsibility. The practice can be likened to sacrifice upon the altar of convenience—like the pagans, and even Israel, once sacrificed infants upon the white-hot, stone hands of Moloch.

And now parents are dressing children as young as age 4 as transvestites and parading them in honor of LBTQ… etc., etc., rainbow, Genesis 6-like activities.

We have reports of all that went on with the Jeffrey Epstein island evil involving under-aged girls, and even of pedophilia among younger children who were abused in horrendous ways by well-known people. Yet the national media has swept all such reports under the proverbial rug of forgetfulness. And America has been at the direct center of all this anti-God activity. The most blessed nation in history—in terms of material blessings and perhaps second (only to Israel) in spiritual blessings—has become perhaps the most debauched, lascivious, licentious nation ever.

This brings me to the crux of this subject.

As some know, I believe Jesus prophesied the time of the Rapture. I don’t mean, of course, that He told us the day or hour, as He Himself said only the Father knows that. But I’m more convinced than ever that He gave conditions precisely as they’ll be when He calls believers into His presence.

“For the Lord himself shall descend from heaven with a shout, with the voice of the archangel, and with the trump of God: and the dead in Christ shall rise first: Then we which are alive and remain shall be caught up together with them in the clouds, to meet the Lord in the air: and so shall we ever be with the Lord” (1 Thessalonians 4:16-17).

And here is where I know I’ll receive some degree of resistance regarding my Amero-centric perspective on Jesus’ words of Luke 17: 29-30.

“Likewise also as it was in the days of Lot; they did eat, they drank, they bought, they sold, they planted, they builded; But the same day that Lot went out of Sodom it rained fire and brimstone from heaven, and destroyed them all. Even thus shall it be in the day when the Son of man is revealed” (Luke 17:28-30).

Here Jesus likened the time He will next intervene into the affairs of mankind to the days when Lot lived and worked in Sodom. The very day Lot went out of that wicked city (out of which the angels led Lot and his family), judgment from God fell and totally destroyed both Sodom and its sister city, Gomorrah.

In this Luke passage, Jesus was referring to that moment–the Rapture. As we’ve looked at many times, He couldn’t be referring to the very end of the Tribulation, when as many as three-fourths of the earth’s population will have died during the seven years of God’s judgment and wrath. At that time—the time of His Second Coming (Genesis 19: 11)—it won’t be business as usual, as given in this prophecy. The few rebels left on the planet will be hiding in caves from God’s King who is coming through the scrolled-back blackness on the bright clouds of glory.

Now, to bring it down to our present closing hours of this age, I propose that the Lord might have had in mind a particular people and nation as He described how things will be at the moment of the Rapture.

America today is the greatest nation in all of recorded world history in terms of spectacular advancements and achievements. It is the apex nation in this regard. No other has come close—that we know of…

We hear constantly that all the world is about to collapse in financial catastrophe, and even perhaps explode in nuclear war. These predictions have been around for years. Yet the world is buying, selling, marrying, planting, building—all the things Jesus prophesied for the time when, like in Lot’s time, God’s people will be removed from the earth.

While Europe is quickly dissolving in energy-crisis mode and the financial systems of the world seem about to collapse, Americans are still, like the folks of Sodom, living in ways Jesus described: we’re buying, selling, building, etc.

I maintain the Lord might well have had in mind this very nation we call America as the model for the future time of the removal of God’s people.

Scanning a fearful future, to the Christian, is really to be scanning a fantastic future! All of this points to the blessed hope of Titus 2:13: Believers are on the very cusp of coming into the joint heirship with the Son of God we are promised.

“But as it is written, Eye hath not seen, nor ear heard, neither have entered into the heart of man, the things which God hath prepared for them that love him” (1 Corinthians 2:9).

Even so, come, Lord Jesus!

Next post He Cannot Deny Himself :: By Gene Lawley