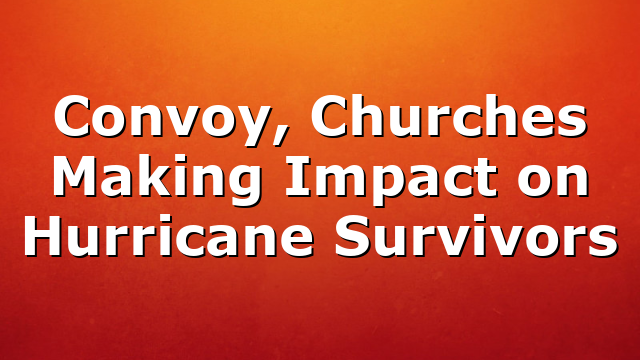 PentecostalNews
Through its Points of Distribution and partnerships with 21 local churches, including First Assembly of God in Fort Myers, Convoy of Hope has sent scores of truckloads of aid, distributed hundreds of thousands of pounds of relief supplies, and served thousands of Hurricane Ian survivors over the past several days, bringing hope in the name of Christ to 11 Florida communities.

According to Ethan Forhetz, national spokesperson for Convoy of Hope, 60 truckloads of relief supplies have been delivered or are en route with 336,612 pounds of product already distributed. However, distributing aid to individuals on the islands has been challenging.

“Pine Island has been a unique response because of the difficulty of getting there as the bridge was destroyed,” Forhetz states. “Over the last few days, Convoy has been able to use a boat to ship supplies to the island. There, Convoy is setting up The Way Assembly of God in Bokeelia, Florida, on Pine Island to be a distribution hub for the island. Starting today (Thursday), we have access to the island by truck. We are watching weight limits so we are sending a box truck to drop off supplies and resource the church as a point of distribution. To this point, we've sent water, food, and a lot of gasoline, since the island was out of fuel.”

“We took a direct hit . . . wind gusts up to 206 miles per hour,” says Renee Carlson. “But it was a miracle that our little church and fifth wheeler were saved . . . there are also so many wonderful stories about people’s lives being spared.”

The Carlson’s home, however, experienced significant damage and their son, who is also the youth pastor at the church, had his entire home swept away.

“It looks like a bomb went off — trees are all gone, telephone poles split in half, even some of the concrete poles,” Renee Carlson recounts. “One of our church members has a two-story house that now has a huge catamaran on top of it.”

Carlson says that currently thousands of people are reported as still unaccounted for, sharing stories of people who were caught up in the torrent of rushing waters, with some miraculously being rescued.

Yet she shares how her son and husband are busy repairing generators and helping distribute relief supplies provided by Convoy of Hope and new generators provided by a member at First Assembly — and people are flocking to the church.

“I believe many people are going to come to God because of this,” she says. “I’m encouraged and excited about what God is going to do . . . as the Church continues sharing the love of Jesus and meeting people in their desperate need, God is going to do wonderful things.”

Todd Weston, who pastors River of Life AG in Estero and is the presbyter for the Fort Myers section, having just delivered 50 gallons of gas to the Carlsons to use and distribute, says that some areas are ready to start the gutting process, while others, especially manufactured home neighborhoods along the shore, will reportedly be bulldozed as the water damage was extensive and mold is already growing.

“These people lost their homes, the contents of the home — everything,” Weston says. “I was at Skyline Church in Cape Coral, and the line of cars for food distribution and basics seemed to go on forever . . . people just trying to survive.”

Weston, however, confirms the experiences of other ministers — churches are full on Sundays, with many people who are new to church, in attendance. “And what’s remarkable is there are people there who have lost everything . . ., yet they have a heart of praise in the midst of all of this.”

Russ Hurst, pastor of First Assembly of God in Fort Myers, says that in addition to hosting Convoy of Hope and parking lot drive-thru pick-ups of supplies, congregation members are taking bags of groceries and other needed items into the portion of their communities that are in more depressed areas, spreading the love of Christ as they do.

However, he notes that what has been remarkable to witness is the Church coming together in swift and effective action.

“The flexibility and the speed in which the Church has responded and is able to get relief into areas has been incredible,” he says. “The body of Christ is everywhere. Convoy was one of the first, if not the first, on the ground here. We’ve been getting into the neighborhoods — Christians physically sharing the love of Christ and our neighbors are responding.”

“There’s a lot of hopelessness,” says Sharon McLaughlin in a Convoy of Hope release. But McLaughlin, a volunteer from First Assembly, believes that meeting needs even in a small way brings hope. “They need more than we can give them, but we can give them something — you don’t withhold from people when it’s within your ability to do something. We’re doing something.”

Hurst, who believes the gospel begins and ends with compassion, notes that Jesus always showed His love before He shared His love for people.

“Jesus did the physical things for people — healing people, feeding people — before speaking to their spiritual needs . . . the gospel includes physical compassion,” Hurst says. “Some neighbors I’ve been trying to witness to, completely melted when someone from the church went out of their way and gave them 5 gallons of gasoline for their generator. From that simple act, they showed up to work with us, volunteered with Convoy of Hope, came to church — they were just blown away by people loving them. They cried and cried and later told me, ‘We need to come to your church — we need that!’”

Hurst says he could share story after story about people responding incredulously to the tangible love of Christ through selfless acts performed by First Assembly congregation members, Convoy volunteers, and other church congregants in the region.

“When you give to AG Disaster Relief, you give the immediate ability to empower the missionary, the local church overseas, and here in the U.S.,” Hurst states. “You put the resources in their hands to distribute in the love and name of Jesus.”

But even though money provides the desperately needed relief to survivors, one survivor, Emanuel, who lived in Cape Coral, but lost the home he was in, expressed what meant the most to him.

“The food didn’t give me hope,” he said in the Convoy video conversation. “It’s you fine people out here doing the work, the good works, that’s what gives me hope — that there’s still good people in this world. It brings a tear to my eye.”

As relief efforts to the heavily damaged islands will need to continue for an extended period of time, Hurst says that for those on the mainland of Florida, the next steps are quickly approaching – cutting up and hauling off downed trees followed by the gutting and repairing of flooded and soon-to-be molding homes.

“It’s going to take a while,” Hurst says, a heaviness in his voice. “But in the weeks and months to follow, we’re going to need construction teams to work through the district office to help our damaged churches and communities rebuild.” 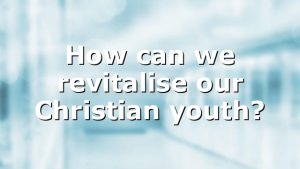 Previous post How can we revitalise our Christian youth? 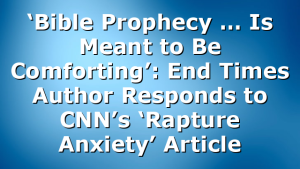